If you have been to the Riviera Maya, you are sure to have been to or at least seen one of Xcaret’s parks. Xcaret if the parent company that has several all inclusive hotels, Xcaret Park, Xoximico, Xenotes, Xavage, Xel-Ha, Xenses, Xplor, and also tours. Each one of their projects offers something new and an adventure for visitors. Xcaret has been working hard on a new project called Xibalba. This reserve is in the center of the peninsula and will offer an amazing experience to those that visit. We recently got the opportunity to visit and see how the project is coming along. We were impressed! We hope we convey the scale of the project and what it will be like when it opens in 2022.

What is the concept of the Xibalba Reserve?

To understand just what the Xibalba Reserve is, it is helpful to know a little about the Maya and how they viewed the universe. To the Maya there were three levels, heaven, earth and the underworld. The exact translation of Xibalba is hard to describe, but it refers to the Mayan underworld or the place where souls live. In the Yucatan Peninsula there are cenotes and caves that were thought to be the entrances to the underworld. Throughout the peninsula caves and cenotes have been found with artifacts and ceremonial items that indicate the Maya used these spaces for rituals and a place to connect with the dead.

The Xibalba Reserve is mostly carved into the stone base of the peninsula, connecting cenotes and creating an underworld for visitors. Throughout the reserve you will see symbols of the the Maya, like the ceiba tree, which was sacred to the Maya. This reserve is not just to see some nice cenotes, it is much more! 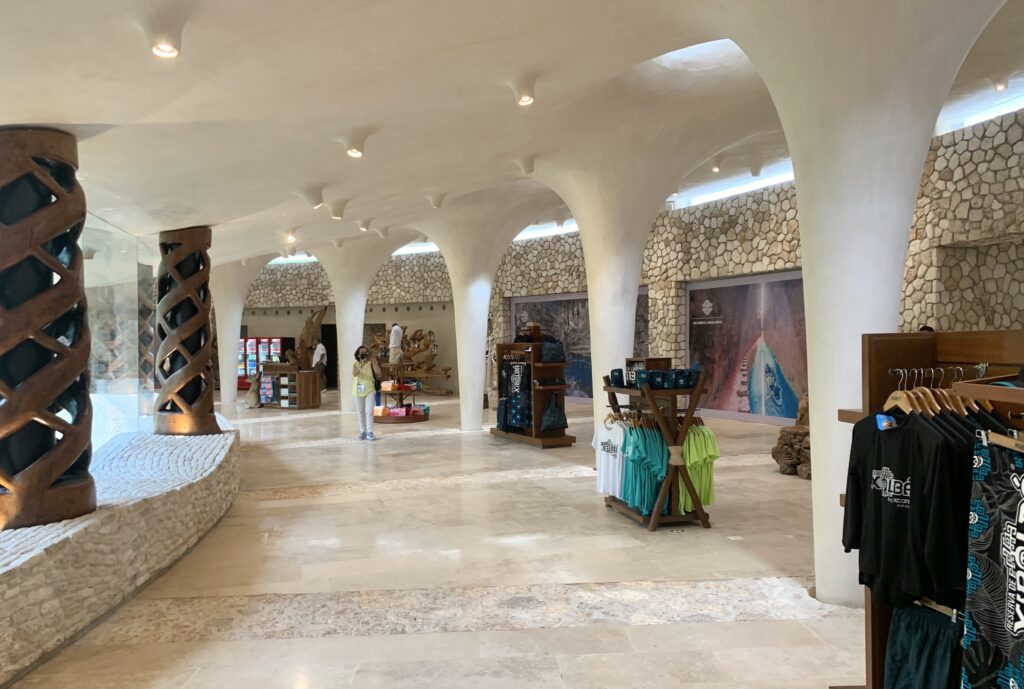 This is the entrance lobby where your tour begins. 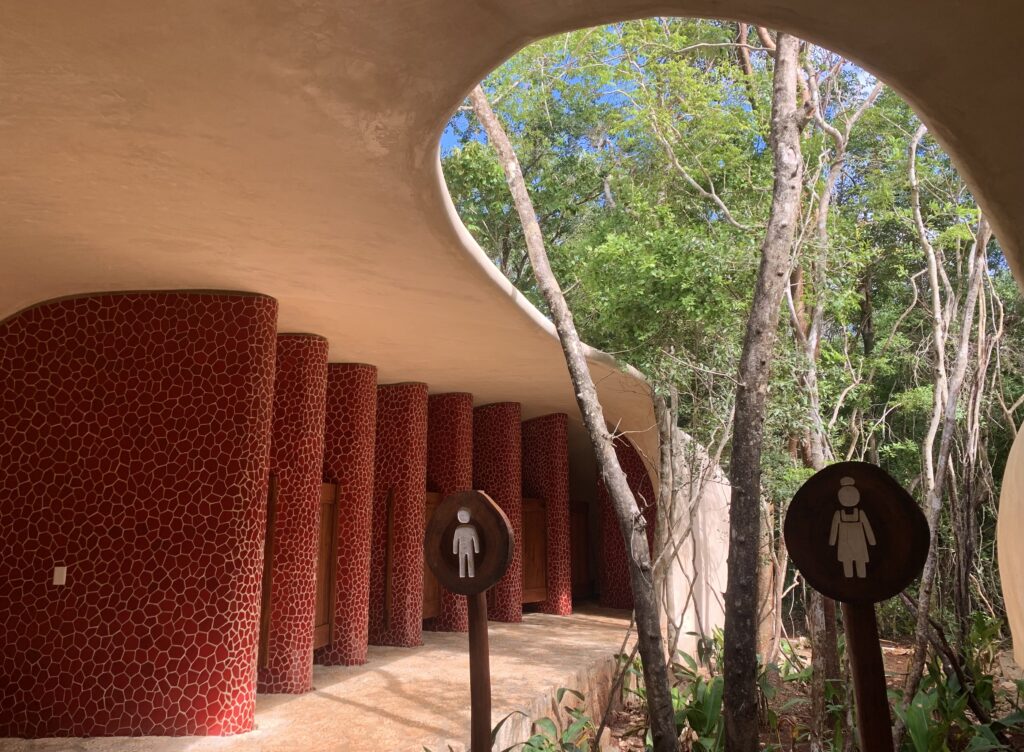 Even the bathrooms are designed well to incorporate nature. 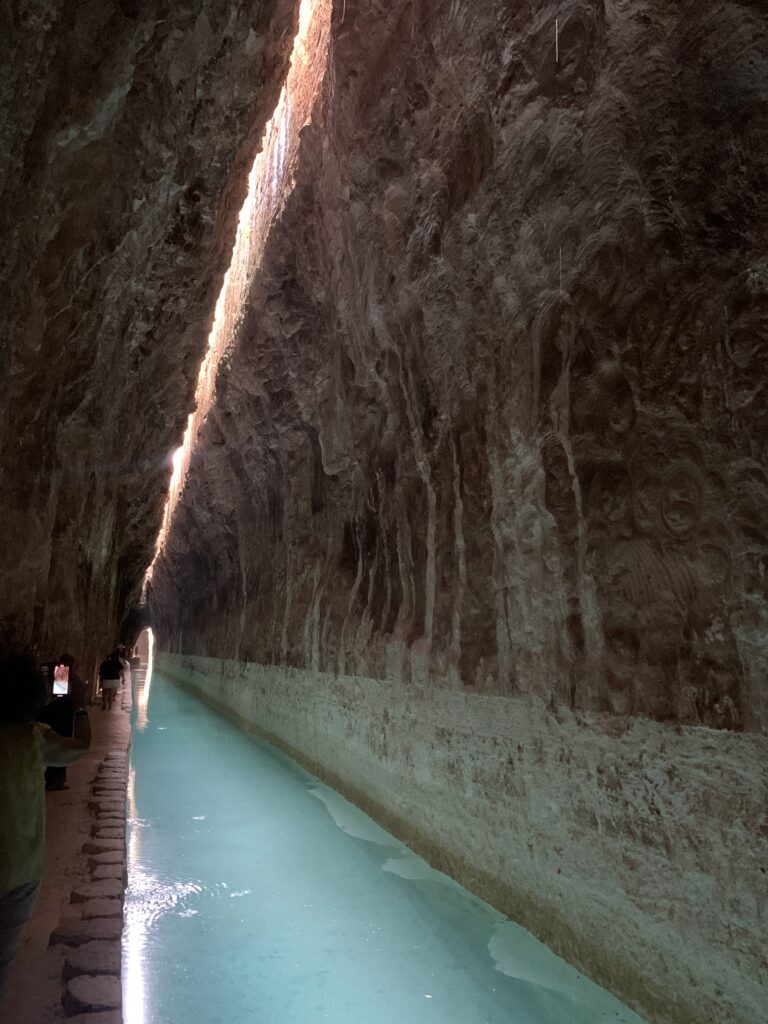 This is probably one of the most iconic photos of Xibalba. this is a carved stone waterway with a sliver of light passing through a cut in the stone floor of the peninsula. 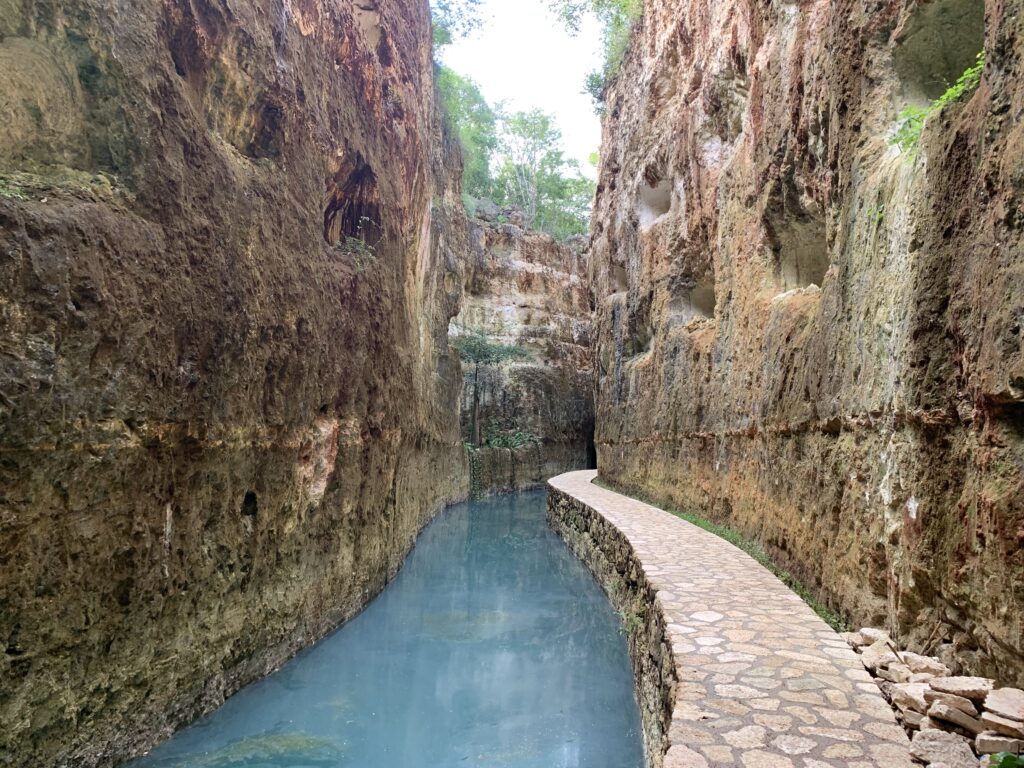 One of the waterways where you can participate in an activity. 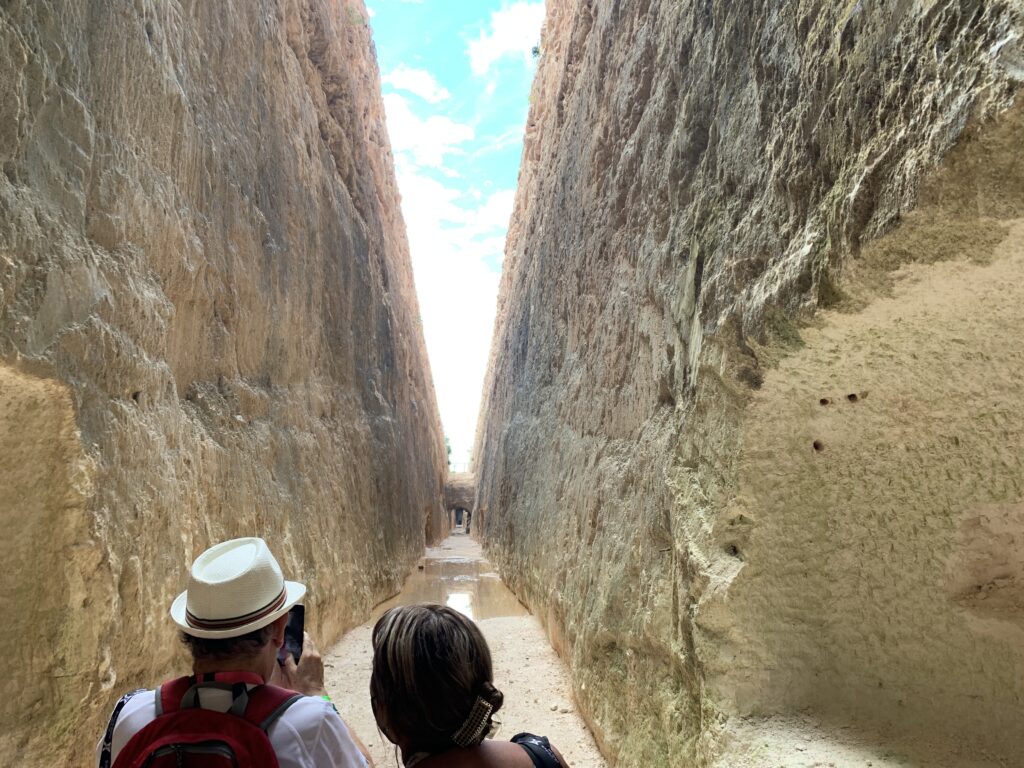 This photo captures just how large this project is. It is amazing how they connected all the areas with pathways underground through solid rock. 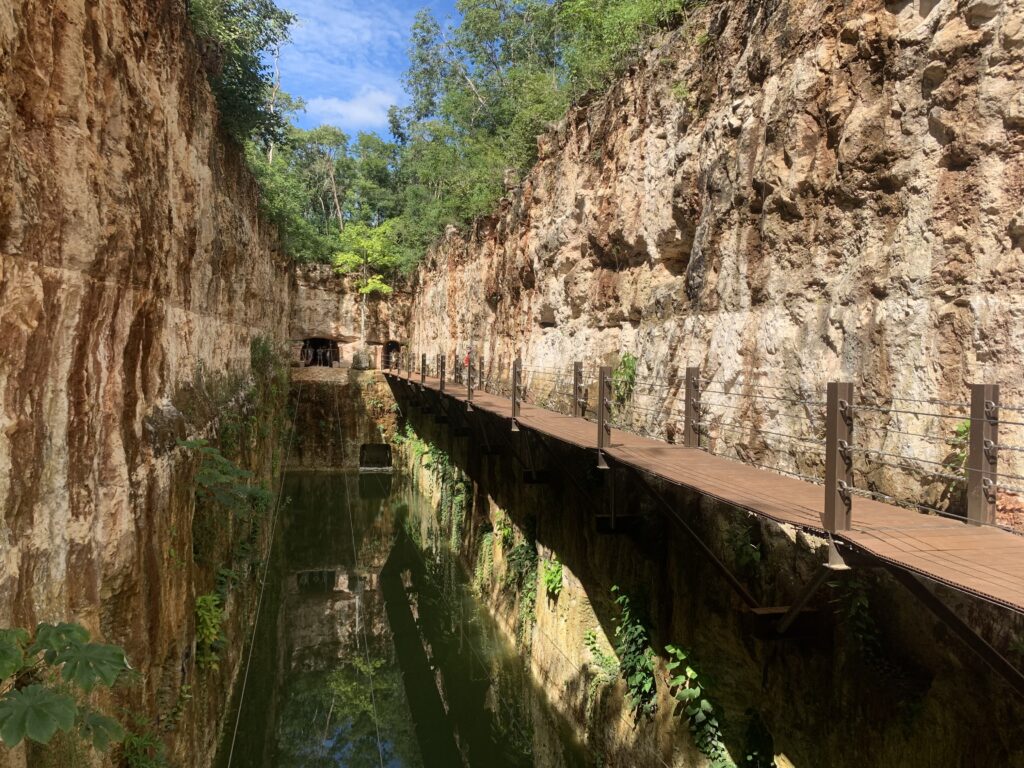 This is an elevated walkway above the water where you can take a zip line hammock. 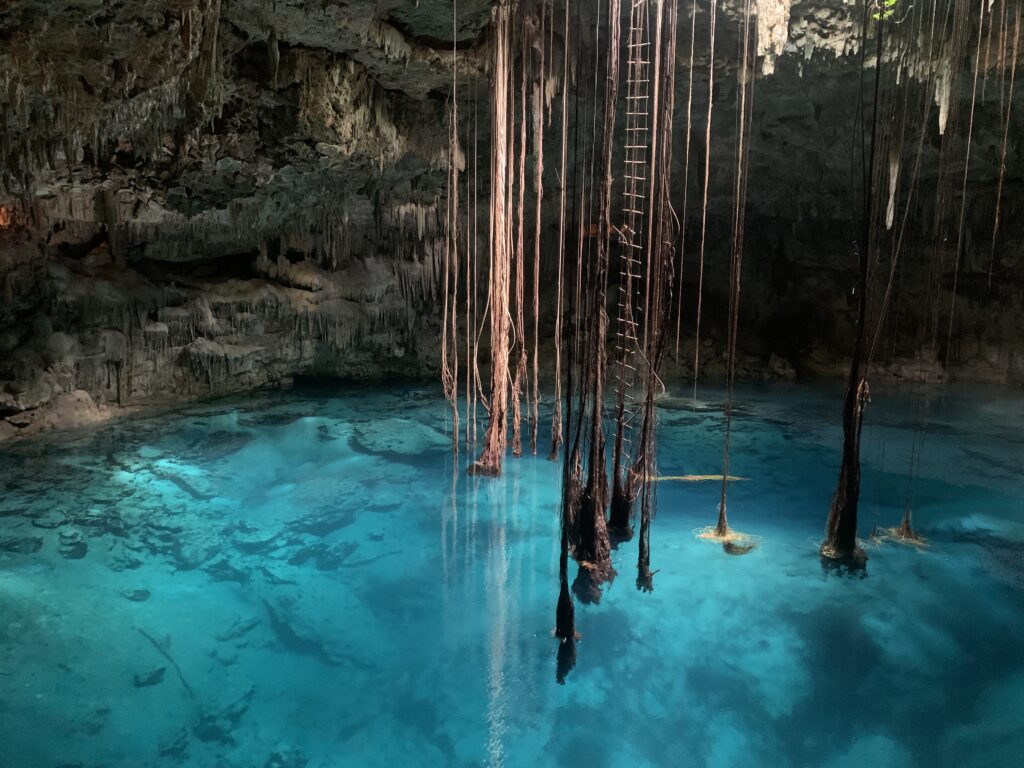 This is just on of the cenotes at Xibalba. The water is so clear and beautiful! 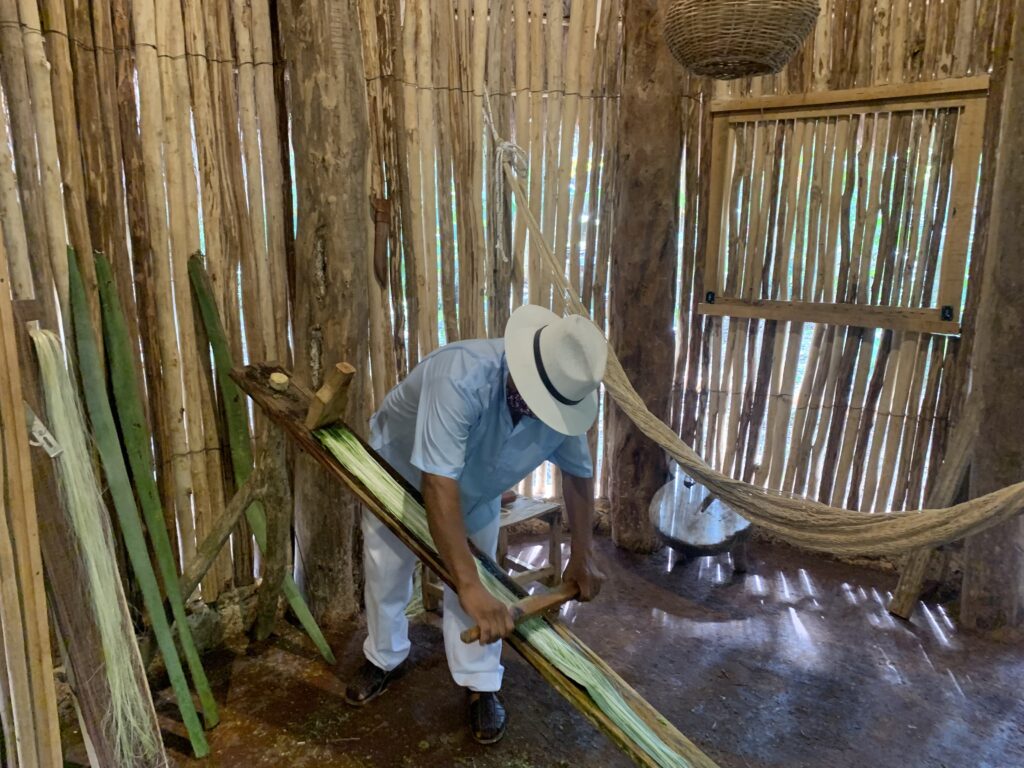 In the Mayan Pueblo part of Xibalba you can see demonstrations of the local culture. Here a man is taking the fibers out of this plant. the fibers will be used to make things like rope. 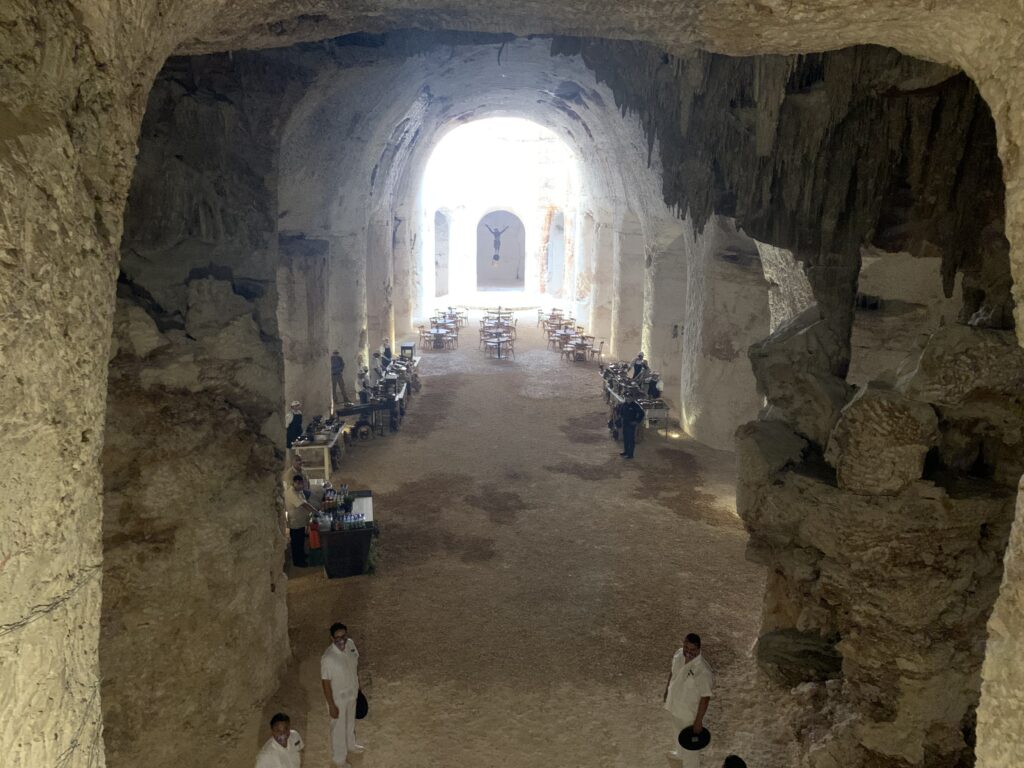 This chapel is caved underground in solid rock. It is an enormous space.

Our video of what the Xibalba reserve looks like now

We toured this new project of Xcaret to share with you what Xibalba looks like now. It is important to note that the project is not finished, but you can get a glimpse of the scale of the project. The video is a little long, but there was so much to show you in this amazing reserve.

What will make this project of Xcaret different from the other parks?

For starters, this is called a reserve because it is more of a nature reserve. The other parks of Xcaret, even though many include the natural world, are more geared toward adventure and an attraction for tourists to have fun. Xibalba is a large property that Xcaret is working to preserve and make a reserve. Even though there will be activities at Xibalba, you will be immersed in the natural world of the Mayan jungle. You will also get an authentic look at the Mayan culture, especially with a visit the Mayan pueblo in Xibalba.

Visitors will be in small groups and visit all the areas in a circuit. Along the way there are activities like swimming, canoes, zip lines, and snorkeling.

The Xibalba Reserve is near Valladolid in the center of the Yucatan Peninsula. The closest small community to Xibalba is Yalcoba. From Playa Del Carmen the Xibalba reserve is about 2 hours and 15 minutes. From Cancun it is 2 1/2 hours.

What is the future of the Xibalba Reserve?

We are going to make some predictions even before this new project is open. The shear size of the project means Xcaret is investing in the future of tourism for the Yucatan Peninsula. For decades the tourism jackpot has been the Riviera Maya with its turquoise water and large all inclusive hotels. There is an effort now to draw some of that tourism to the interior of the peninsula and beyond. We have seen the rise of popularity of places like Valladolid, a small city near to the site of the Xibalaba Reserve.

Valladolid is a small colonial city in the center of the peninsula. It has grown leaps and bounds since 2010. More hotels have opened, restaurants and cenotes that once only had a few people visit per day, are Instagram famous and people seek them out. Valladolid has also benefited greatly from the labeling of Chichen Itza as a new wonder of the world. Many bus tours from the Riviera Maya pass through Valladolid (including two from Xcaret, the Xichen Clasico and the Xichen Deluxe). While tourism is a much larger part of Valladolid now, it still is not enough to support the reserve, so how are they going to get enough tourist to visit?

The Xibalba Reserve is about 2 to 2.5 hours from the Riviera Maya. This means that bus tours can go for the day to experience this new project. While tourists have many options for parks and attractions, this new project will garner some visits just because of how interesting this reserve looks. But, we don’t think it will get as many people that, for example, visit the other parks of Xcaret. So what more could be at play?

The new Tren Maya project and beyond

If you have not heard about the Tren Maya project yet (Mayan Train), you are missing out on information about a new gigantic infrastructure project for the entire Yucatan Peninsula and will connect five states. The Tren Maya will connect the Riviera Maya with historical site like Chichen Itza and colonial cities like Merida, Izamal, Campeche and others. The train will being more tourists to the interior of the peninsula and create new connections and transportation hubs, making exploring a little easier. We still don’t think this will bring enough people to visit Xibalba, but there could be another project in the future. If Xcaret was to build a hotel in the center of the peninsula, it would be a base for exploring Chichen Itza (with one of their tours), visiting the Xibalba Reserve and perhaps a combination with their other hotels n the Riviera Maya.

The first hotel of Xcaret, Xcaret Mexico Hotel, has been a HUGE success. It not only captures the imagination of the magic of Xcaret Park, but they have created a new standard for all inclusive hotels. We think the Xcaret Hotels are some of the best in all of Mexico and are pretty competitive worldwide as well. Creating another hotel in the future to expand the network of Xcaret would be a smart move and fall in line with the current projects that are being developed. We shall see what the future holds, in the mean time, you can look forward to visiting the Xibalba Reserve which is scheduled to open June of 2022.

Thanks for reading and watching our video about this new project of Xcaret. If you are interested in more information about the other parks of Xcaret, we have article and videos for each of them on our website. Just use the search box to look for anything you might need for your next trip to the area.