The remodeling work of 5th Avenue and the surrounding streets plus Fundadores Park is about 22% complete.  The first stage and the timetable of its completion are going according to plan, reported the Mayor of Playa Del Carmen, Laura Beristain Navarrete.  The Mayor also assured that at the end of the remodeling,  the tourist area will shine with a renewed image to receive tourists.

It is important to note that not all of 5th Avenue is being remodeled under this plan. It is only the section from the Park Fundadores area near the Cozumel Pier to about the Quinta Alegria mall near Constituyentes Avenue. Playa Del Carmen started to open on June 8th, but it has been a gradual opening and by the time tourism comes back in stronger numbers, 5th Avenue and the Park Fundadores area will be ready.

Many comment that it would have been better to have this done sooner since tourism is just starting to come back. In reality much has changed in the world in the past five months. Last year, no onewould have predicted that tourism would nearly halt worldwide. This project evolved fast and was able to break ground while things were still closed and reactivation of the economy was needed. In the coming months this project will be completed and be a new welcome to tourists again. 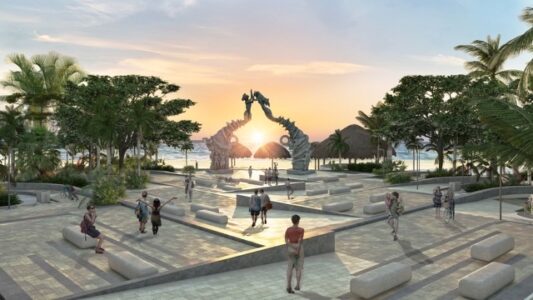 Continuing the work on 5th Avenue and the park area

Regarding the progress of this project, the director of Public Works, José Luis Castillejos Gómez, reported that in this first stage “we are working on the leveling of the ground, as well as the part of electrical and service installations.  This stage includes demolition and dismantling all of the previous sidewalk pavers, as well as some planters that were in poor condition. In the Fundadores park, there are levels being created. The entire pavement has been removed and planters that were in bad shape are being replaced.

The director of public works anticipated that the new face of the Fundadores Park will be opened shortly. He explained that approximately 85% progress is made in the dirt road, with only 25% missing to complete the levels of the dirt roads.  After this the retaining walls will come and then place the new pavement. Once this stage ends, progress will be 20% weekly, he said, after adding: “I ask you to have the confidence that the works will be completed according to the planned time.”

He anticipated that the works to be carried out in the maritime zone will be done shortly.  She explained that the flyers of Papantla are going to be relocated to this area and that businesses in the streets surrounding the park will also benefit, where civil society also participates with their contribution to the reforestation of the park.

To see the full plans of what the Park Fundadores and 5th Avenue will look like, see our article here. This is also not the only large infrastructure project that has begun in the area. The Mayan Train project has begun construction.