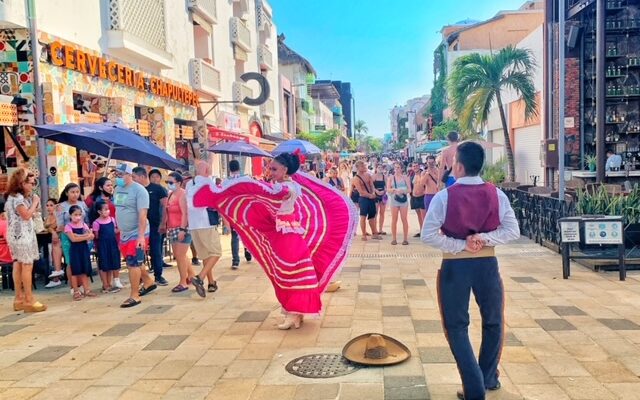 The growth of Playa Del Carmen

What is driving the increase in population? It is mainly younger people from other parts of Mexico moving to Playa Del Carmen. It is the lure of work that mainly attracts people. The second reason is the lifestyle and weather. This not only attracts nationals, but more and more foreigners each year. As big a Mexico is, and all the coast it has, there are relatively few beach towns that offer a strong economy and opportunities.

The increase in population has an effect on many aspects of life in Playa. A growing city can mean growing pains. Below we will discuss some of the changes and affects the growth is having on the area.

As the population of Playa Del Carmen grows, the development moves westward.

What is the population of Playa Del Carmen in 2020?

Taking the census numbers with a grain of salt

While the census in Mexico is a very serious event, there are some factors that should be considered when looking at the numbers. For one, the 2020 census started just before the pandemic and continued, in part, during the pandemic. This made it hard to accomplish the goal of doing the most thorough census. Besides the pandemic, there are other factors that make taking a census hard in places like Playa Del Carmen. We will continue below.

With year round warm weather, there are a lot of people that escape the winters to the north. This means we get a lot of snowbirds as they are called. These are foreigners that either own a place in Playa or rent for about 4-6 months a year. This means that the population of Playa Del Camren increases in the winter months by a couple thousand.

Another group of transient people are the amount of workers that come weekly to Playa Del Carmen. For many of the construction jobs, people are recruited to work in Playa from other areas. People come from smaller towns as far as 3 hours away.  People come to work for the week and stay in shared rooms (called cuartos) and return to their towns on the weekends. This means that thousands of people come to “live” in Playa during the week and leave for the weekend.

It is near impossible to count accurately who is only “visiting” for the week and what apartments are actually lived in. It is possible that some people get counted twice during the census. One time in their towns and another as a person living in Playa Del Carmen. This can happen if the census does not talk to a person in the household. This is very possible in Playa since people would be working while in Playa and only sleeping at night.

Part of the population are tourists

Playa Del Carmen gets about 1 million tourists a year! That is a large influx of people. That is about 2740 people arriving each day! With this many people mainly coming to the central area of Playa Del Carmen, this makes it feel a lot busier in town. Often when walking on 5th Avenue you can see a lot of people strolling around enjoy the festive atmosphere. Some estimates are 10,000 people walk 5th Avenue daily. So with so many tourists coming to Playa daily, this adds another 1% to the overall feel of the population. 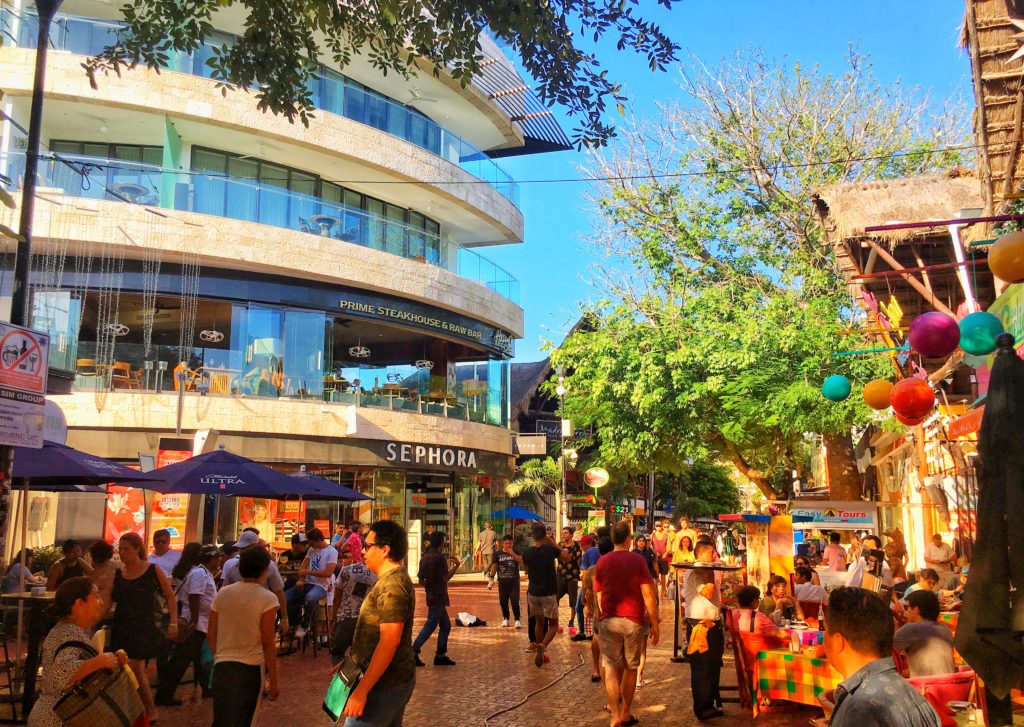 This is in contrast to the average household in Mexico, which is 3.7. That is a 60% increase over Europe for average household size. This highlights the fact that more people live together in Mexico under one roof. Houses tend to be much smaller also, so the overall feel of Mexican cities and towns are smaller feeling, but can have the same population as much larger feeling cities and towns around the world. This means the population of Playa Del Carmen is similar to Anaheim California or Windsor Ontario.

Funny antidotes about the census

The census is not just about counting people. There are short and long forms for the census. Some of the funniest things on the form (or things that outsiders might find funny are things like what the walls are made of. The census actually has adobe and sheet metal listed for options for the wall material. There is a question about the roof of the house and it includes things like palm and terracotta tiles.

The census also tries to get a look into how people dispose of trash, how they cook food and even how many lightbulbs are in a house.

Anytime a city grows, there are growing pains. Many lament the fact that Playa is changing and not the same small beachside town that it used to be. But at the same time, the same people are enjoying the nice new rooftops, high-end restaurants and shopping. Playa is still growing rapidly and until it slows, there will be changes that affect everyone living and visiting the area.

Real Estate on the rise

The residential population of Playa Del Carmen is growing and so is the daily tourist population. This means places for everyone to live and stay continues to grow as well. While the majority of new Mexican residents buy and rent properties in fraccionamientos and far west of the highway, it does impact the real estate market for the downtown area. Rents in the downtown have continued to increase as more units are converted to vacation rentals.

The expat communities continues to grow as well. This was in part because of  the pandemic.  More people decided to move to a place they wanted to be. We have also seen a whole other group of foreigners coming. More younger people have been coming to Playa, and many of them stay for a few months, some of them digital nomads. This has driven the rental market recently, helping to prop up the dip from the pandemic.

Since Playa is bordered by Playacar on the south end and hotels on the north end, the central area continues to have more infill and move north. The situation of limited space has kept prices stable and demand for rent helps buyers fill units.  The downtown has been growing up, and we mean vertically. More little houses have been raised and then built back as a four or five story condo building.

Playa continues to expand and build more planed communities on the west side of Playa. This has created whole new neighborhoods. The sad part is the old growth forest that are being cleared for new developments. We wish the city would mark a point where there can be no more development. This way the old growth forest can be saved and better use of existing lots closer to the center can be planned better for use.

Construction continues to grow as the population of Playa Del Carmen grows.

Anyone that has done a little driving outside of the immediate downtown will have noticed more traffic recently.  There are some areas that are especially bottlenecked now. The north end of Playa along the 307 Highway is getting more crowded. Entering Playa from Cancun you will notice more development and this means more traffic, which is all using this four land road. The south end also is getting more crowded. Anyone that has tried to get in and out of Centro Maya will have noticed this. Yes, traffic is picking up and sometimes you need to plan for extra time getting places.

Crime is something people talk about a lot these days. It is typical to see a rise in crime when tourism drops. There are less jobs and more idle hands. The pandemic has not helped the situation. Of course, with a lot of new people moving from other parts of Mexico, the cohesiveness of Playa is not the same. Of course doubling in size should mean crime should double as well just to keep pace. At any rate, it does get talked about more and is the reason we have a guide for residents regarding crime.

The biggest stresses to the infrastructure is the water systems and power grid. For a long time Playa Del Carmen has been behind the curve with and adequate sewer system and treatment of wastewater. Power outages always grab peoples attention as well since it is very noticeable. The next thing many people would say is needed is better roads. There are a lot of bad potholes and main arteries in bad shape.

Since Playa is growing, there have been some improvements to the water system, a new highway flyover was built through Playa and the Mayan Train project is coming to Playa as well. The past year also saw a renovation of part of 5th Avenue and Park Fundadores. These are just some of the larger projects that have happened recently. We are sure as Playa grows, we will see new projects coming online. 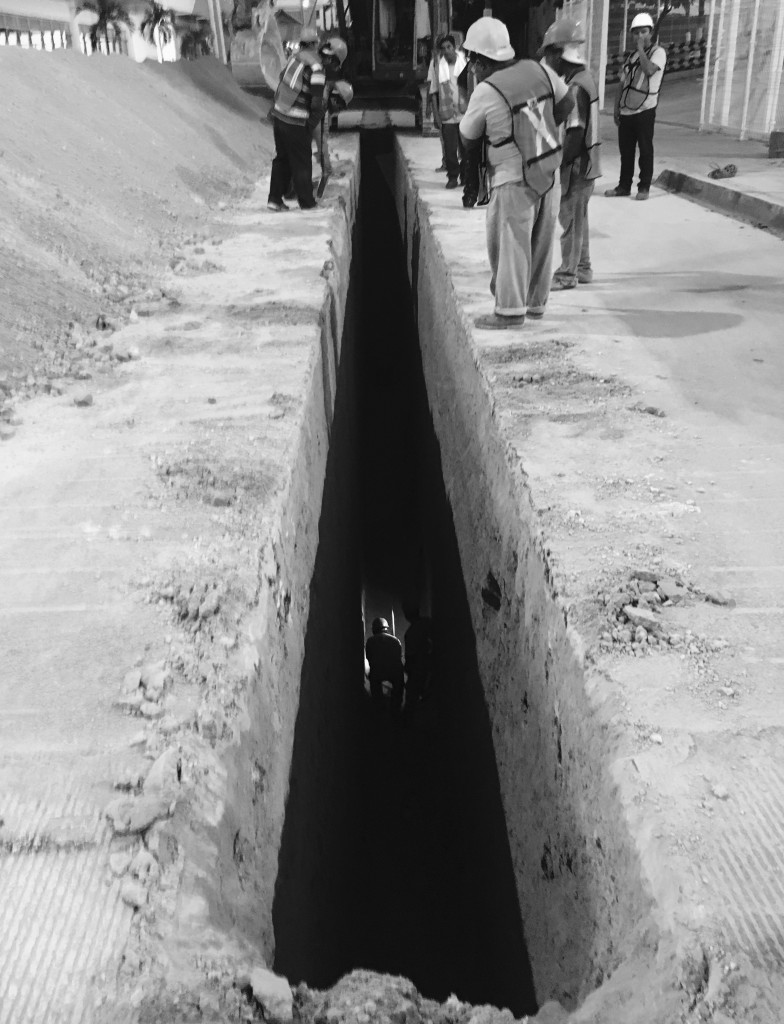 Digging deep!. This was a narrow trench that was dug for the new sewer pipe going through Playa Del Carmen in 2016. A man with a flashlight inspects the work.