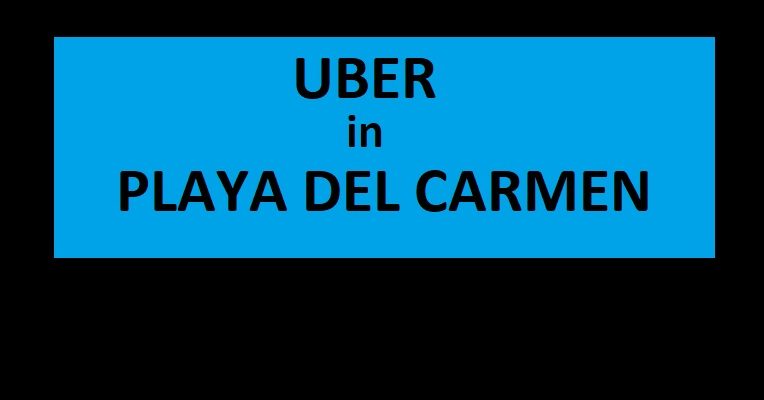 After years of controversy, Uber (and other digital platform transportation companies) appear to be one big step closer to Playa Del Carmen. Residents and tourist have been clamoring for Uber in Playa Del Carmen for some time. What is different this time?

The Quintana Roo Congress unanimously approved the State Mobility Law May 28th, 2018. It was approved by 20 votes in favor and none against, among its central points the creation of a Mobility Institute, and the recognition of transport service contracted through digital platforms, like Uber. There are other digital platform transportation companies like Cabify, and Lift, Uber though is the most well known.

This new law makes it legal for digital platform transportation companies to operate in the state. However, it outlines restrictions for companies, like Uber, which have been contentious in the past.

Uber first started operating in Cancun in September 2016. Uber was granted a provisional operation until further legal processes could be done. The response was lackluster with new drivers. When Uber users in Cancun wanted to go somewhere there were only a few drivers in the city. This might of been because of the intimidation of the taxi union.

Almost all of the taxicabs and vans used in public transport in the Riviera Maya had hand written signs on the windscreens. The said “No Uber” and things like protect the families of the area. There was also a procession of drivers that drove to the state capital to protest.

What has been the taxis reaction this time?

On May 28th, 2018 the taxis block entrances to Playa Del Carmen on the south and north sides. As you might know, there is only one road (the 307 Highway) that runs the length of the state. This caused major backups on the highway. There were also roadblocks in Puerto Morelos and Cancun.

The taxi commission plans to fight the law but in a positive sign, wants fair completion with other transportation options.

What comes next, well no one knows. This battle has been going on for about two years now. We can only hope that there is no violence and both sides can work mutually side by side offering seamless transportation options to riders.

Why has their been such a pushback against Uber?

Uber seems like a great user friendly service, so why is there a problem? So why are there some that don’t want it? It mainly is the taxi union pushing back with an overwhelming approval of citizens for Uber.

We interviewed people from the taxi commission to find out why there was such a protest against Uber. The taxi drivers main complaints back in 2016 were:

On a lesser note, Mexico has been a socialist leaning country. According to Merriam-Webster that means:  any of various economic and political theories advocating collective or governmental ownership and administration of the means of production and distribution of goods. This mindset of people working together, for example taxi unions, is somewhat engrained into the culture.

There is also the fact that most Mexicans work for companies that take out all the taxes. Most Mexicans do not file at the end of the year. Companies providing new platforms like Airbnb and Uber allow people to work for themselves basically. While there is a somewhat legal format in place to record income and pay taxes, much of the money collected is not reported.

This is why the state of Quintana Roo signed a tax agreement with Airbnb as of October 1, 2017 to add a 3% lodging tax onto bookings. There was a regulation in place already but this makes it easy for host to pay this tax automatically. It however still leaves the responsibility to host to pay income tax.

Why people hate most taxi drivers

Years ago when Playa Del Carmen was smaller, there was not much issues with taxis. They provided a service for tourist coming to the area. As the city grew, tourism increased, the reputation of taxi drivers started to go down. Even though there is a set price for zones in Playa Del Carmen, drivers started overcharging customers. Both locals and tourist disliked haggling and arguing over the official price.

With the city growing and the number of taxi drivers increasing, the chances of a “bad apple(s)” got greater. Reports of people getting robbed or attacked in taxis has increased in social media. The number of car crashing involving taxis has also increased as well as other taxi drivers arriving at a crash seen to intimidate the other driver.

This does not mean that all taxi drivers are out to get you. There are some hard working drivers that are just trying to work and make a living.

Making money on the side

If you have ever walked down 5th Avenue you probably have heard taxi drivers offering “women, men, Chilly Willy’s“. Why is this? Well they often advertise this to get a chance to drop people off at gentleman clubs and other businesses in order to get a commission. Taxi drivers make more on this then most fares in Playa Del Carmen.

This can be offensive to some, but it also explains why it can be a bother to charge 30 pesos for a ride in town. There is more easily made quick money.

Here is a typical taxi in Playa Del Carmen.

Does this mean you can jump in a Uber in Playa Del Carmen now?

This does appear to be one step forward but don’t expect to order a Uber soon. Most residents are in a “wait and see” mode. in light of past protest and aggressive ways taxi drivers stopped Uber divers and blocks cars, people want to see how things go. The legal battles are not over and based on past experiences, it might be a while before you can use any app for transport.

For now, what is the best way to get around?

There is a public bus system in Playa Del Carmen. It cost only a few pesos but it is limited. Busses and vans tend to be slow and crowded. The routes mainly serve 30th Avenue in the downtown area and take people to outlaying neighborhoods.

If you are going to other towns, places in the peninsula or Riviera Maya, the ADO bus company has good reliable service with two bus stations in Playa Del Carmen.

If you want to go to from Playa Del Carmen to Cancun or to Tulum there are the colectivos. This is more of a local service with shared vans.

If you are looking for transport back and forth to the Cancun Airport, we recommend a private transfer service. This one here is very reliable and affordable.

In Playa Del Carmen there are the taxis. In our article we show the zone charts and prices of what it should cost.

Thanks for reading our article about Uber in Playa Del Carmen. Let us know what you think in the comments below, we would love to hear from you.

2 Comments on Uber and other ride sharing services coming to Playa Del Carmen?