Visiting Mexico has been at the top of a lot of list on travel websites lately. Both as a destination to visit and best places to retire and live outside of your home country. How did Mexico get so popular and what does it have that you are missing? Here is some insight.

Why so many are visiting Mexico now

Value for your money

The Mexican peso has always offered good value for those visiting Mexico but lately the weak peso adds even more value. With some currencies increasing double digit percentage gains, travel has become cheaper and almost makes you want to say “Why are you not in Mexico yet?” Just imagine saving 5-20% on your vacation without even trying!

ADO bus company is one of the biggest in the Yucatan Peninsula and you can get affordable to most cities and towns. For example you can go one way from Playa Del Carmen to Tulum which takes about 55 minutes for just about $3.25 USD (to see more about ADO and the bus stations in Playa Del Carmen, see our article here). Other regions of Mexico have different bus lines with similar prices.

Mexico has one large airline called Aeromexico and several smaller budget airlines have started servicing routes. Imagine flying one way across the country for just $50USD! It is possible and deals like this can be found (see our article on how to fly around Mexico on a budget).

You can find basic hotels for as little as $35 USD a night (even in Playa Del Carmen!) and many hotels offer good value compared to other countries. Overall though, hotels in Mexico tends not to be the best thing you get for your money but are still good. Restaurants is where you can really get a good value.

Imagine having a gourmet meal in your home country. You have a nice meal and some wine, what is the price? Maybe for two people you spend $75 USD? Here for the same quality you can have almost half that price. The nice thing about Playa Del Carmen and other cities in Mexico is the food scene. There are not only a lot of Mexican chefs transforming the menus of Mexico but there are a lot of people that have moved to Mexico and bring their flavors and styles with them, creating great gourmet international cuisine restaurants.

Tips for getting the best value of your money

Some international businesses take advantage of the currencies and can take away your savings when visiting Mexico. Here are some tips to get the most from your currency.

These facts should make you start thinking about discovering some of the wonders here.

Mexico is a Big country to visit 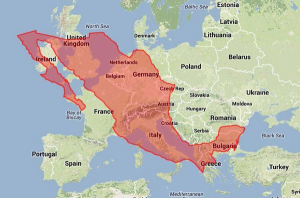 The map above just highlights how big Mexico is. Just think how diverse Europe is with it’s many cultures. This is how Mexico is to some degree. It is a very regional country with distinguishing flavors, different types of dress and even unique indigenous languages in areas.

Since the country is so large as well, it affords many climates and regions to explore. Everything from volcanos to jungles. Many people have heard of the big tourism draws to Mexico like Chichen Itza, Cancun, Puerto Vallarta,  and Cabo but there are second tier locations and many more to discover. Often if you start focusing on one area, you learn about some amazing places you would want to visit.

Even if you are just coming to the Riviera Maya, there are many places with in a day trip to discover. There are colonial cities, remote islands, and less discovered Mayan ruins.

Why now is a great time to live in Mexico!

Mexico has long been on a list of places people north of the boarder and from Europe seek to learn more about as a possible place to move. Literally millions have moved to Mexico before you and have paved the way leaving a trail of blogs and website that make it much easier in this digital age.

Many would at first think that moving to a so called “second or third world country” would be a step down in life. But many that have moved often find themselves happier and more free with a high quality of life.

Here are some reasons why people are moving to Mexico now.

We hope you get a chance to explore Mexico and all it has to offer. For those that do, they often find themselves falling more in love with it the further they go. Visiting Mexico can reward you with a vacation to remember.