Chichen Itza is certainly the number one tourist attraction (besides going to the beach here). Bus loads of people flow from Cancun and Playa Del Carmen daily to this Mayan site. More than 1.2 million tourist visit Chichen Itza every year. Why is this so?

Well a lot has to do with the semi restored extensive ruins at this site. There are many ruins that are just mere hills covered in jungle. How many people want to see that? Once you see one you have seen them all. At sites like Ek Balam and Coba you can see these “hills” that are really unrestored temples in addition to the restored pyramids. Today Chichen Itza has been restored and preserved as much as possible and the once wealthy city with a culturally advanced civilization can be experienced by walking around.

Do you want to go on a tour to see this marvel of the world? We have teamed up with a tor provider that offers good prices to see these ruins.

Click here to check prices for tours and what is included.

What is there to see at Chichen Itza?

The main attraction and most identifiable is “El Castillo” or the castle which is 90 ft. tall. It has staircases on each side with 365 steps representing the number of days in a year. This pyramid was used  for  religious and astronomical observation purposes. It is also called the Temple of Kukulkan, after the feathered serpent god. Mesoamerican cultures  periodically built  larger pyramids atop older ones, and the Temple of Kukulkan is one such  example. In the mid 1930s, the  Mexican government sponsored an  excavation into the pyramid. They  discovered a staircase under the north side of the pyramid.  By digging  from the top, they found another temple buried below the current  one.  Inside the temple chamber was a Chac Mool statue (The Chac-Mool depicts a  human figure  in a position of reclining with the head up and turned to  one side, holding a  tray over the stomach. The meaning of the position  or the statue itself remains  unknown) and a throne in the shape of  jaguar, painted red with spots made of  inlaid jade. After installing a  set of bars and a locked gate to protect the  jaguar figure they allowed  tourists to come and view it, but in 2006 the tunnel  leading to the  temple chamber was closed to all but archaeologists.

Tip: A visit to Chichen Itza  on the  vernal and autumnal equinoxes will give you a fascinating view of the phenomenon between the sun’s light and the edges of the stepped terraces on the pyramid. This very brief shadow display will be on the sides of the northern  stairway a serrated line of  seven interlocking triangles that gives the  impression of a long tail leading  downward to the stone head of the  serpent Kukulkan, at the base of the  stairway. This makes the body of the snake visible.

The Observatory at Chichen Itza  is called  El Caracol (or snail in Spanish) because it has an interior staircase  that spirals upward like a snail’s shell. The first structure was  probably  built during the period of the late 9th century and  consisted of a  large rectangular platform with a stairway.  A round tower of  about 48 feet high was built on the platform,  with a solid lower body, and an  observation chamber on the top. The round,  concentrically-vaulted Caracol was built and  rebuilt several times  during its time of use in order to calibrate its  astronomical  observation capacity. The windows in the Caracol point in the  cardinal  and sub cardinal directions and are believed to enable the tracking of  the movement of Venus,  the sun and the moon and other  celestial  objects. 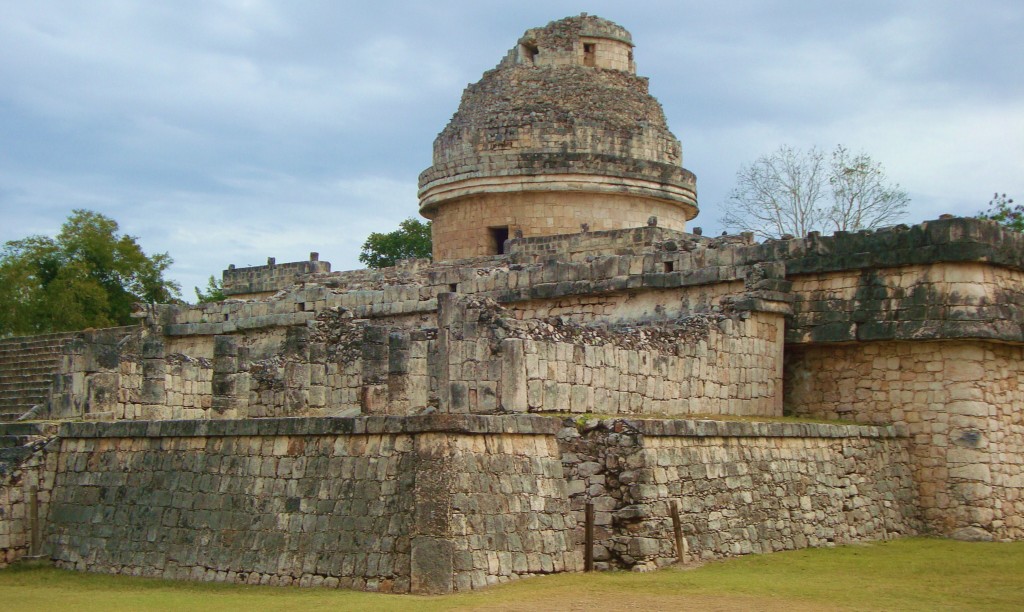 Chichen Itza is  also famous for its Great  Ball  Court with stone rings 20 feet high upon two its walls.  Each of the northern, southern and eastern  sides  supports temples, which were probably used for rituals on the days when  the sacred games were played. There are sloping benches on the sides of  the court and  they were probably used to help keep the ball in play.  They are carved with  reliefs of the victory celebrations. One  of the  scenes, the beheading of a player in center field witnessed by the players of both teams, is one of the most dramatic examples of Maya art.  The  scene not only illustrates the danger faced by the players but  also the sacred  importance of the game.

Other notable buildings and structures at Chichen Itza is the Temple of the Warriors, also known as the Temple of the Thousand Columns. There is also a traditional Mayan house recreation to give you an idea of what the area once looked like. These houses were made of wood, clay and thatch roofs, so every trace of them has been erased with time.

On one side of the Chichen Itza is one of the two cenotes The  larger cenote is called “Cenote Sagrado”  or Sacred Cenote. According to  sources the  pre-Columbian Maya threw sacrificial objects and human beings into the cenote as a form of worship to Chaac, the Maya rain god. When  archaeologists dredged the cenote in 1961 and 1967 they found various types of offerings, including jade carvings, pottery, gold and silver  artifacts and even  human skeletons. The cenote was also considered by  the Maya to be an entrance  to the underworld and it is believed that  the sacrificial victims were venerating Chac Mool by entering this  underworld. Could these human sacrifices have been the downfall of the city? Did the water source become polluted? We don’t know for sure but it is important to be logical between mixing religion and your drinking water.

Besides having so much to offer as far as restored buildings, Chichen Itza was named one of the New Seven Wonders of the World in 2007. This gave a high amount of publicity to the site. The government of Mexico knew this would have a major effect on tourist for the Yucatan and promoted the voting to elevate Chichen Itza to the new status. This has added thousands of jobs to people in the area.

Today Chichen Itza is a UNESCO World Heritage Site and is the second most visited of Mexico’s archaeological sites. You can no longer climb the pyramid in Chichen Itza but you can at Ek Balam and Coba. Most people arrange a tour to come and see the site. It is a full day trip since it is about 1hr 40 min. -2 hr 40 mins. depending on the route the bus takes from Cancun and Playa Del Carmen. Most tours take in a beautiful cenote called “Sacred Blue Cenote” in Ik Kil and may stop in the colonial city of Valladolid. Tours usually allow a full two hours at Chichen Itza because it does involve walking  a lot and of course shopping for souvenirs. 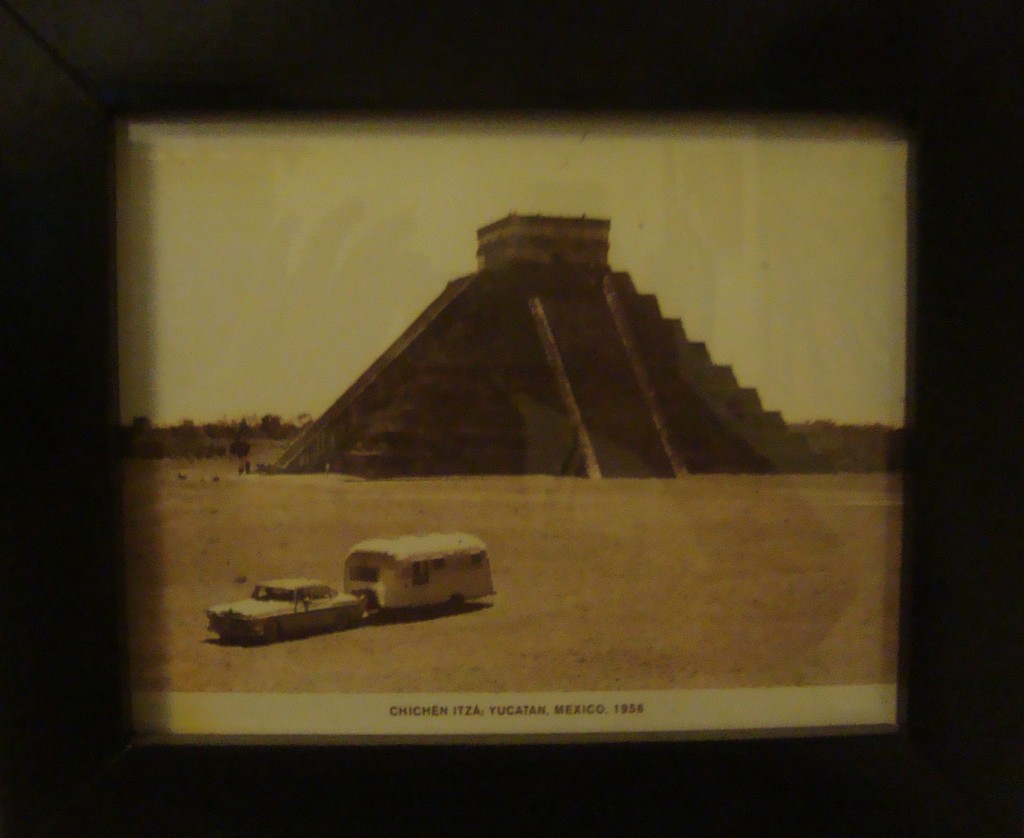 What to bring on tour to Chichen Itza

Have you been to Chichen Itza? Do you have some tips you want to share? Let us know in the comments below. 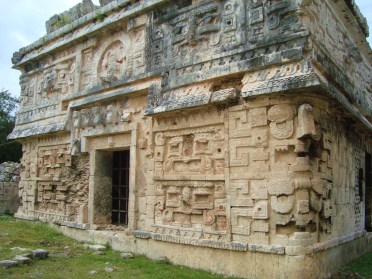