The United Nations Organization UN, as part of its environmental program has decided that this year’s theme to commemorate World Environment Day is the “Restoration of Ecosystems”.  There are many ways to implement this initiative: plant trees, greening cities, reintroducing wild species in gardens, and as does Alltournative, in collaboration and support with INAPESCA and CONANP, with the planting of corals project that preserves marine life called Native Reef.

In Mexico we have the largest barrier reef in America which is located in the state of Quintana Roo and has a total area of ​​more than 9 thousand hectares along the Caribbean coasts of Mexico, Belize, Guatemala and Honduras. 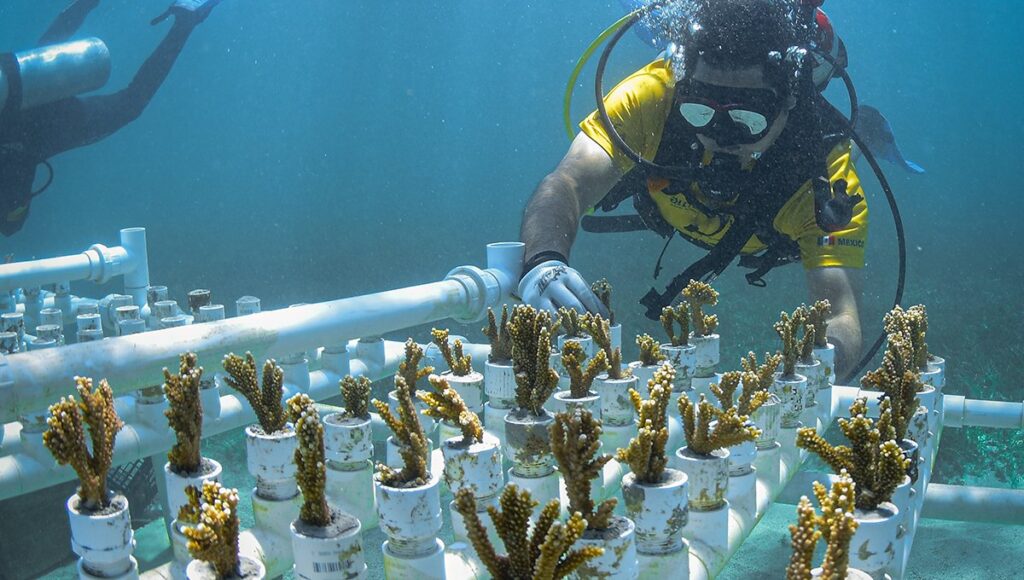 Due to the fishing industry, the garbage thrown into the sea, fertilizers, irresponsible tourism, among others, this ecosystem is heavily damaged year after year and today they are threatened or in danger of extinction.

Fortunately, the conscience of ecotourism and Alltournative, which works shoulder to shoulder with INAPESCA and CONANP, have implemented Native Reef: sponsorship program of the Mesoamerican Reef System (SAM) which is responsible for the massive planting of corals under international ecological agreements that they take care of the natural environment of the reef.

Some of the many advantages of having a coral nursery are:

Caring for and preserving coral nurseries is a necessity for humanity and its subsistence, the UN estimates that by the year 2050 the world could run out of coral reefs.

Nowadays, and thanks to ecotourism, you can know and snorkel in this incredible marine kingdom in a responsible way by visiting NativePark Puerto Morelos, remember that this paradise has been created by nature with the help of thousands of years, for this reason choose the Ecotourism and Release Your Native Spirit by becoming an alternative and responsible tourist.