The Blue Parrot Club in disaray after a night of volilence in Playa Del Carmen.
Tweet

At the closing party of the ten day long BPM Festival at the Blue Parrot Nightclub on 12th Street there was a shooting that killed five people at the scene, one person died later at the hospital raising the death count to 6. The incident injured about a fifteen people.

The shooting took place around 2:30am local time when a dispute erupted at the Blue Parrot nightclub. One of those fatally injured was a Canadian citizen and worked as BPM Festival staff. It should be noted that the BPM Festival is a Canadian organization.

The names of those killed have not been released yet. The nationalities of the victims has been released. The fatalities included two Mexicans, one Canadian, one Italian and one American. It should be noted that the 4 of the 5 people killed worked for the BPM event. The one person that is reportedly not someone that worked at the BPM Music festival was the an American woman.

It should be noted that this was not a mass killing like some media initially reported. This incident started as a dispute and in no way was aimed at tourists.

What was it like inside of the Blue Parrot Club

The area on 12th Street is often full of pedestrians visiting all the clubs and bars and this street is closed to traffic at night. The Blue Parrot was also full of people for the closing event of the BPM Festival. In the panic that ensued, some of the injuries were caused by people running away from the incident and not from gunfire.

The immediate reaction was shock among residents of Playa Del Carmen and festival goers. After the initial shock, people came together to denounce the violence.  Some people marched and other laid flowers at the scene along with lite candles.

Below is a photo taken January 18th outside of the Blue Parrot Club in Playa Del Carmen. People have left notes and flowers in memory of the tragedy.

Flowers and comments left in memory in front of the Blue Parrot Club on 12th Street.

The investigation started from the police department. Even though you can read the official statement from the BPM Organization below, it was the host of the event where it happened and only one side of the story. The investigation continues. No suspect was caught and it was said he left the club and had an awaiting car to get away.

Investigators arrive at the Blue Parrot Club on 12th Street.

Investigators arrive at the Blue Parrot Club the scene of the shooting.

The city officials denounced the violence as well and met to say that future events would be scrutinized if they would be allowed to continue in the city. It was said that the BPM Festival would not be allowed to return the following year.

In talking to people all over the Yucatan Peninsula, people were shocked. This was a good things because it shows that this type of thing is not a normality. Even regular gun violence is extremely low in this part of Mexico.

The city has much recovered and calmed down since. The club are of Playa Del Carmen (12th Street) is quieter with less guest going to it. But we think that tourist have a short memory and each week new people arrive with the desire to go out and enjoy themselves by the sea.

The Official Statement of the BPM Festival and Blue Parrot Statement

It should be noted that this event is still being investigated and eyewitness accounts and the statement from the Blue Parrot Club vary from some of the details below.

It is with great sadness to share that police have confirmed reports of a lone shooter outside the Blue Parrot nightclub in Playa Del Carmen earlier today, which resulted in five fatalities and fifteen injured. The violence began on 12th street in front of the club and three members of the BPM security team were among those whose lives were lost while trying to protect patrons inside the venue.

The BPM Festival has been working closely with the local authorities (Seguridad Publica / Policia Turistica) throughout the festival to ensure public safety and security for all visitors. We are overcome with grief over this senseless act of violence and we are cooperating fully with local law enforcement and government officials as they continue their investigation.

Our thoughts and prayers are with all the victims and their families and all those affected by these tragic events.

The Blue Parrot Club posted this on their Facebook Page January 18th, 2017:

Blue Parrot would like to address the unfortunate incident that happened in the early morning of Monday January 16th 2017.

The reason we have waited to make a statement was to be as informed as possible and to have as much of that facts before addressing this senseless act of violence. We have many false and inaccurate reports and did not want to add to the speculation.

The priority of Blue Parrot year round is the security and safety of our customers. We took all precautions to ensure everyone’s safety and during The BPM Festival we have substantially more security plus a highly professional and international team of door staff.

On Sunday night, Monday early morning, two armed men forced themselves through an exit door and shot one of our international and one of our Blue Parrot security guards as they tried to stop them from entering. At which point they entered and opened fire, resulting in the loss of two more lives.

We send our condolences to all involved and pray for the families of those that lost those closest to them. We are deeply saddened and we hope the city of Playa del Carmen will take a hard look at itself and come together to fight the evils in this town that we sometimes ignore. Blaming music festivals and nightlife is not a solution to issues that have repeated themselves in this country and the world.

Blue Parrot will stay closed until authorities finish all investigations and we hope to welcome you soon again to dance happily under the stars.

We are grieving with the 5 who lost their lives and the numerous who have been injured. This will affect this town and everyone involved for a very long time. Our hearts and prayers are with everyone in these tough times.

The morning after the BPM shooting

It was almost a normal morning in Playa Del Carmen where people went to 5th Avenue to jog and just one block away people were getting ready to scuba dive. Most people had not heard about the events of the night before.

There were only a few blank faced individuals that were leaving for the bus station that had knowledge of the shocking event that took place overnight.

At the crime scene on 12th Street

The end of 12th Street cordoned off by Police.

Inside of the Blue Parrot after the BPM closing party shooting

This morning police combed the Blue Parrot Club awhile the sun rose over the beach and crime scene.

Inside the club you could see random shoes left behind and overturned sofas along with ice buckets and glasses that were supposed to be for a festive night. 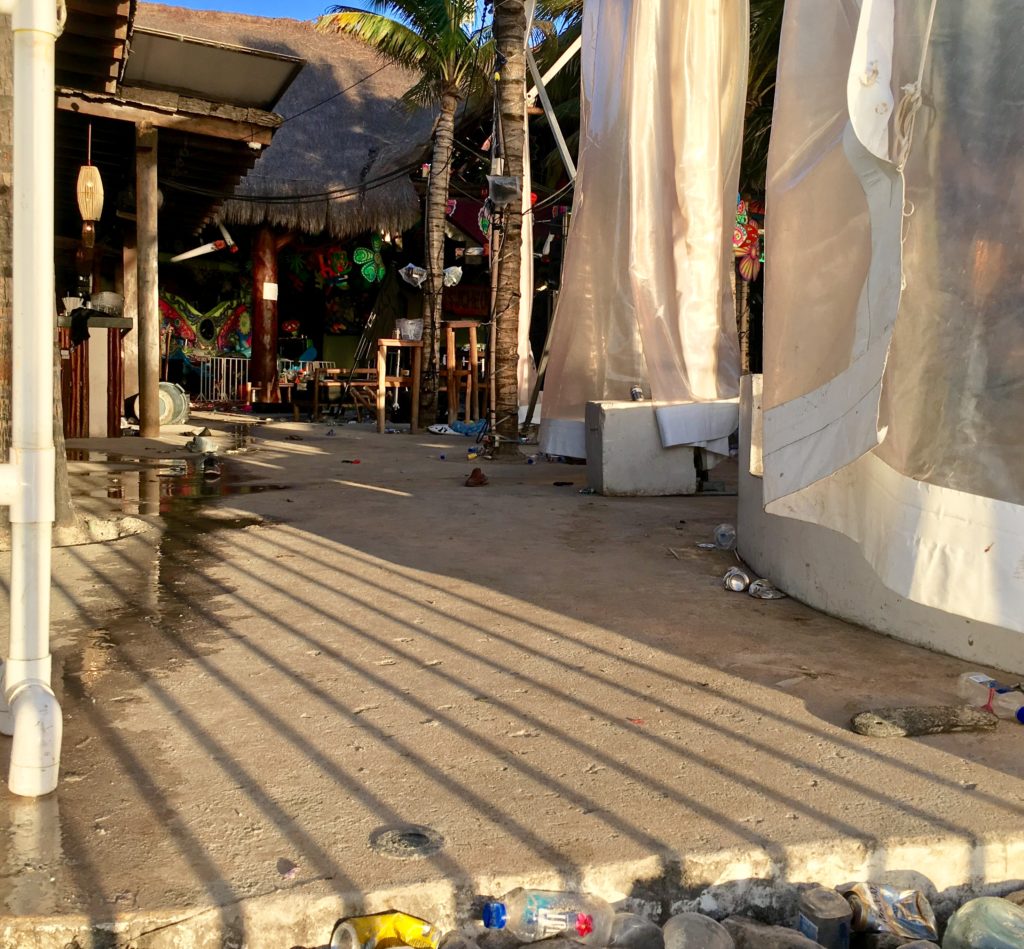 Inside of the Blue Parrot after the BPM closing party shooting. 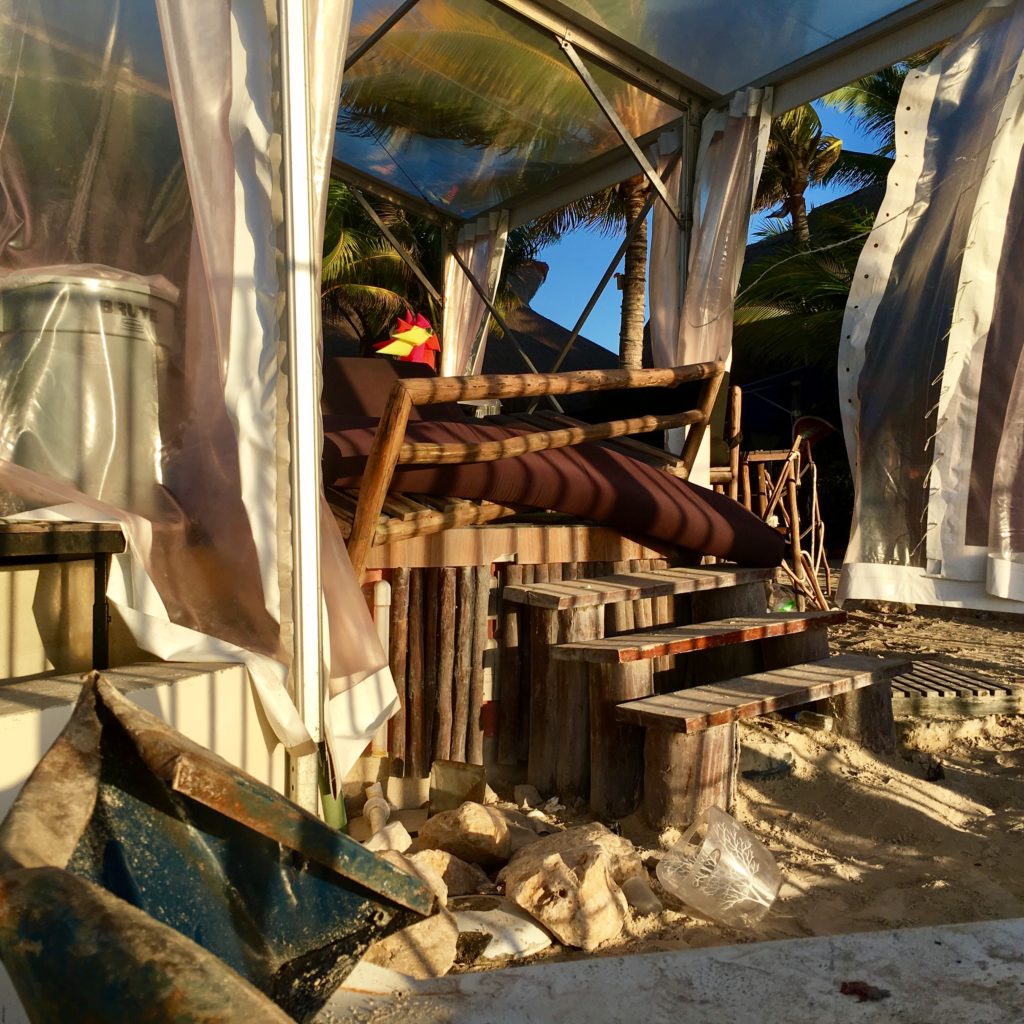 The Blue Parrot Club in disaray after a night of violence in Playa Del Carmen. 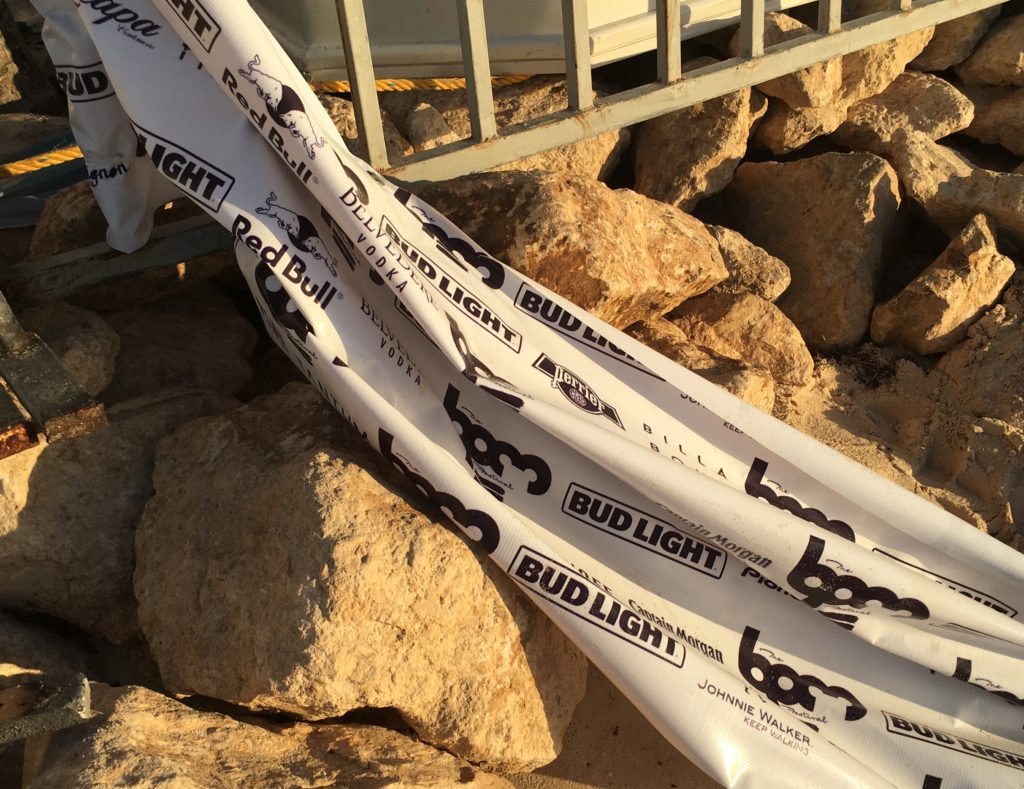 The BPM banner stung along the fence of the Blue Parrot.

This was the first time we covered the BPM Festival. BPM is a 10 day underground music festival with hundreds of different DJ’s playing at multiple venues every day.

The festival attracts mainly younger people in their mid twenties and early thirties. Many of the parties are all night events.

As we mentioned we covered the BPM Festival this year and entered many of the venues. At each entrance there is security as well as security people throughout venues. Often the exit and entrance are in the same place and there is only one main entrance and exit. Walls of 10ft plywood are built around outdoor venues as well as metal gated barriers.

For people that buy a 3 day, 7 day or 10 day pass, the bracelet has a computer chip for registration. Other single passes are only a paper wristband. 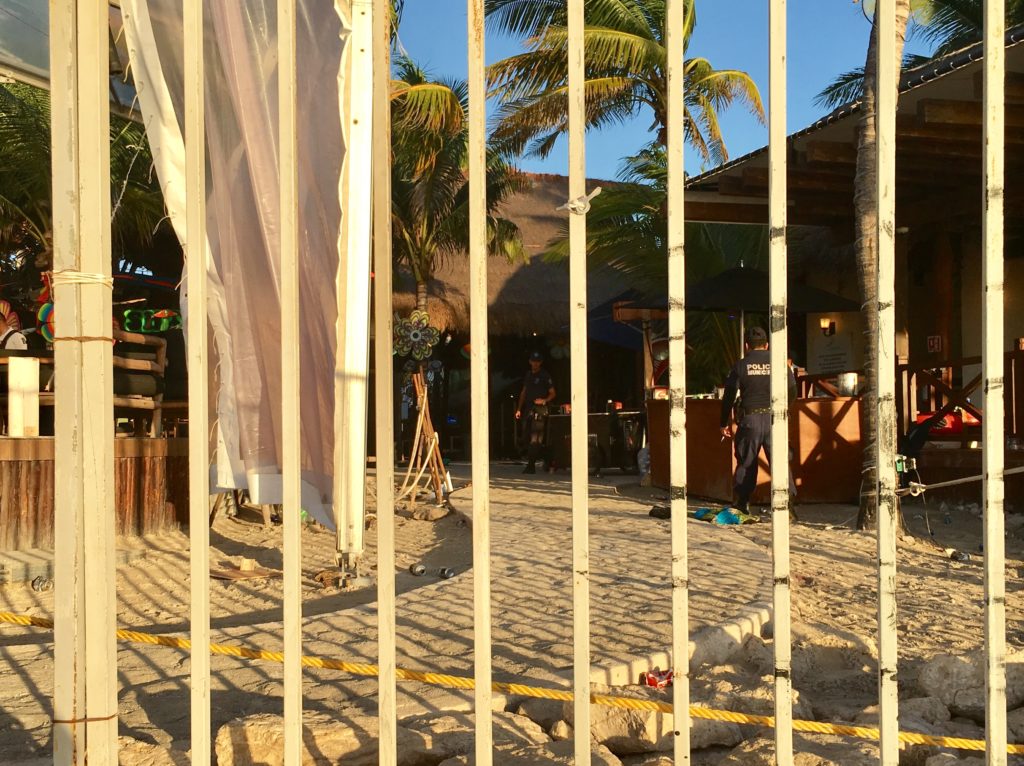 The Blue Parrot Club with metal bars blocking off the beach from the festival.

Should this affect your plans to visit Playa Del Carmen?

The short answer is no but what you do here might change. As we have stated for years, Playa Del Carmen is a safe place to visit compared with many international destinations. In our article on Dangers and Safety in Playa Del Carmen we mention that most of the incidents of crime can be eliminated by avoiding late night bar and club areas and by partying responsibly.

There is always a connection between the going out to party and the type of people that it attracts. We can go around the globe to nightclub shootings that happen all too often. This is not a plague of Playa Del Carmen, this is a problem associated with nightclubs.

This shooting will affect the image of the city and it is sad when so many oppose such senseless violence. Today many locals are dismayed about such an event happening in their town that they love.