Ancient Mayan ruins found in the jungle in Mexico.
Tweet

Our journey deep into the Mayan Jungle in Mexico

We are so pleased to be able to share this experience with you! As you know we love to go out exploring and seeing new places. We also love going deep into the culture and learning about the history of humanity. This is the story of trekking deep in the jungles of Mexico to explore Mayan ruins.

Over 1,000 years ago, there were people living in this area. There were whole cities, a complex culture and an amazing knowledge of the area. Much of the information about them and their knowledge is gone.

We set out on a journey into the Mayan jungle to explore with professionals. The area we went to is not open to tourist and since this area is delicate in nature, we will not say exactly where it is.

We hope you enjoy watching this video of our exploration. We should note it is hard to film in the jungles for several reasons:

However we hope you get a good sense of what it was like to trek deep in to the jungles of Mexico to explore.

The amazing biodiversity of plant life in the jungles of Mexico

A jungle is known for the dense amount of plant life and the jungles of Mexico do not disappoint. What is most striking is the amount of knowledge people had about the biodiversity and what each of the plants was good for. Just imagine people living in an area for hundreds of years. The cumulative knowledge that was passed on from generation to generation was immense. We were with a biologist on this tour and he showed us numerous examples of how different local plants were used. Below we have some examples. 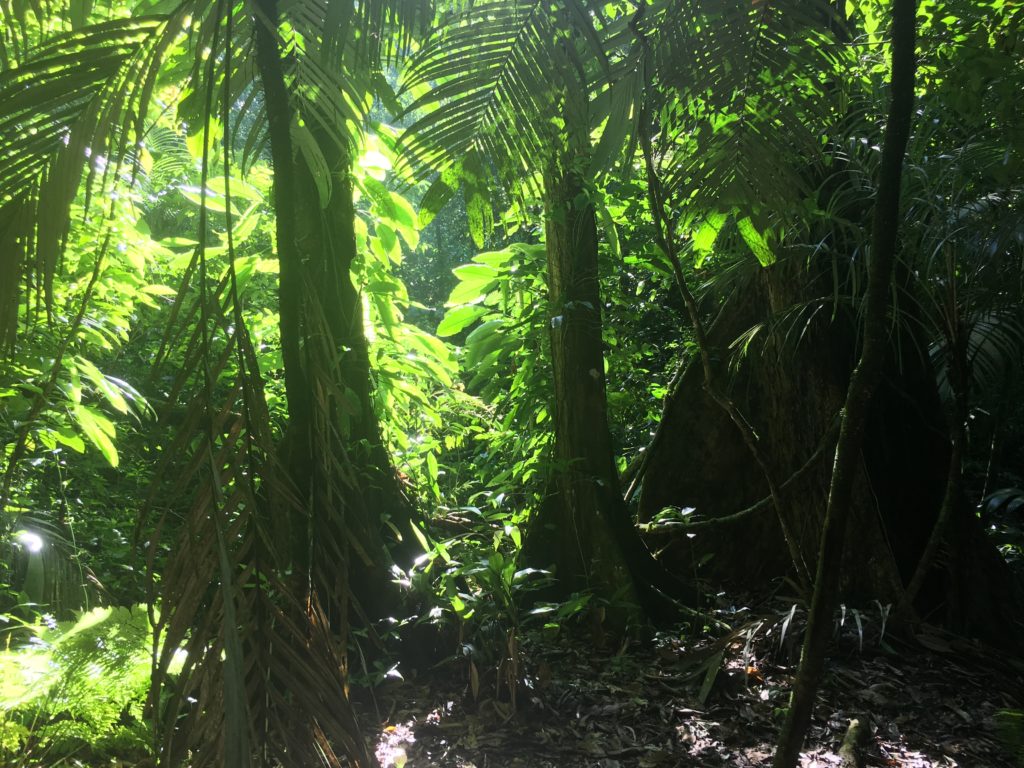 The thick jungle in Mexico.

How plants were used from the jungle in the Mayan culture

Going through the jungle with a biologist that knew the area well, was like walking though a pharmacy with a doctor. So many of the plants we walked by had a use both for medical or were used for food in the past. For the layman it might just look like a bunch of plants, but for someone with knowledge, it is a marvelous warehouse of living products.

Here are some examples of plants and their uses we learned about:

Plants that have symbiotic relationships in the jungle

A symbiotic relationship is one where two organisms work off each other. Sometimes these relationships are to the detriment of one and sometimes it is to the benefit of both.

This is an example of a symbiotic relationship called “mutualism” because both species benefit. 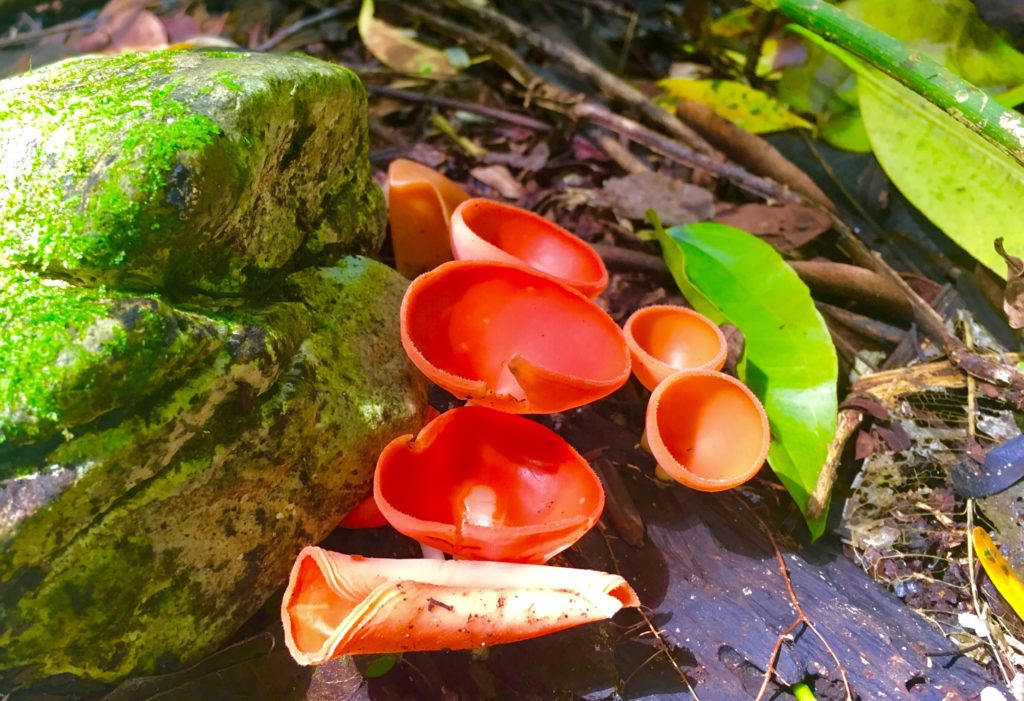 Some of the mushrooms in the jungle that have symbiotic relationships with frogs.

Coincidently the strangler figs shape with many crevasses provides a great place for bats to live.

Why it is important to preserve jungle and plant life

Just for a few examples above, we can see there is a wealth of diversity and uses of the biodiversity. We have just started learning some of the benefits of some species. What is happening in Mexico and the world over is encroachment  into these areas. As communities expand and farmers use more land, these areas are being cut and turned into farmland.

Parts of Mexico might seem like dense jungle, but upon closer inspection there are small roads, houses and even towns in naturally protected areas. There are less and less areas that are totally left along and true habitats for animals that need space, like jaguars.

Another modern issue that is facing these areas are the use of new chemicals and genetically modified seeds. What might sound like a good idea to be able to treat the soil to kill weeds and grow only the crops you need, there is a severe downside. Some are saying that large chemical and seed companies are creating fields where nothing can grow except the GMO seeds. This is keeping the biodiversity that naturally grows in areas from appearing. We face significant challenges now and the future over land use and preserving the important biodiversity.

Ancient Mayan ruins laying abandoned for over 1,100 years in Mexico

Sometimes it is hard to imagine areas that look like a jungle now, were once thriving cities of thousands of people. It took over 1000 years for these areas to return to a natural state, but there still is evidence of the last inhabitants. Below are some examples of what we found on our expedition to the Mayan jungle in Mexico.

In the photo below, there is an ancient aqueduct. Most of this still functions today! We can look back at history and see that there are cities in the middle east that had aqueducts about 1000 B.C. 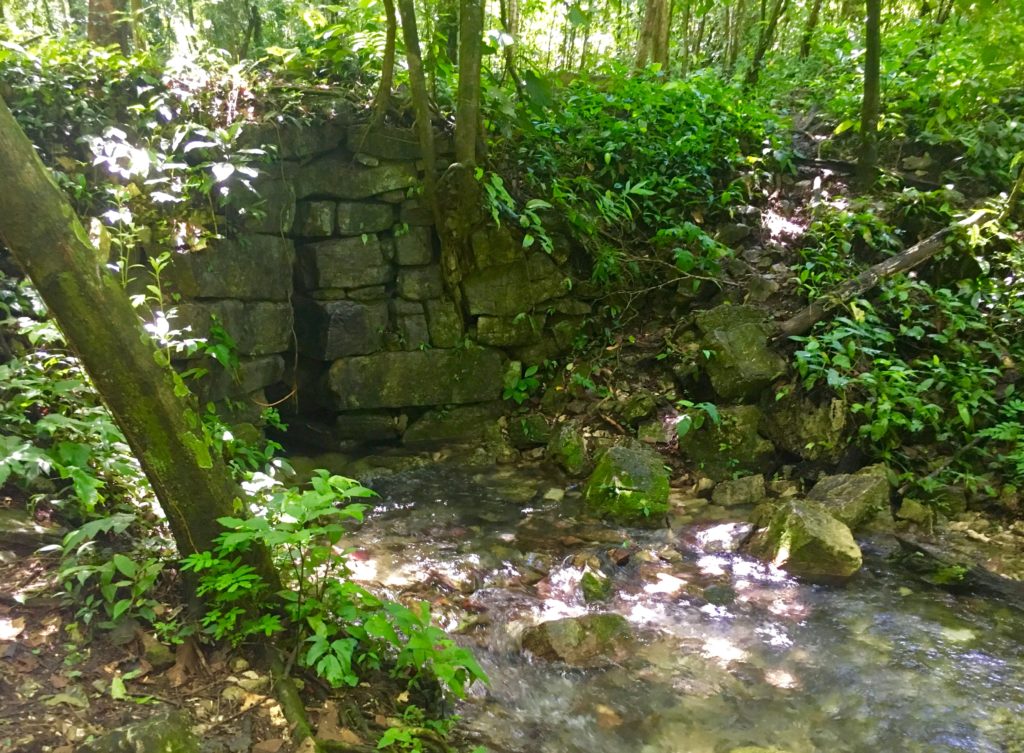 We arrived to a very special place that we liked in the jungle. Since these ruins were abandoned about 1,100 years ago the jungle grew and took them over. What now is the floor of the jungle is the roofs of many buildings.

This was once a Mayan structure that had a hold in the former roof. We were able to climb down into this structure to see what was built and used so many years in the past. It is truly remarkable to imagine this area active with thousands of people and the things that took place in this ancient city. 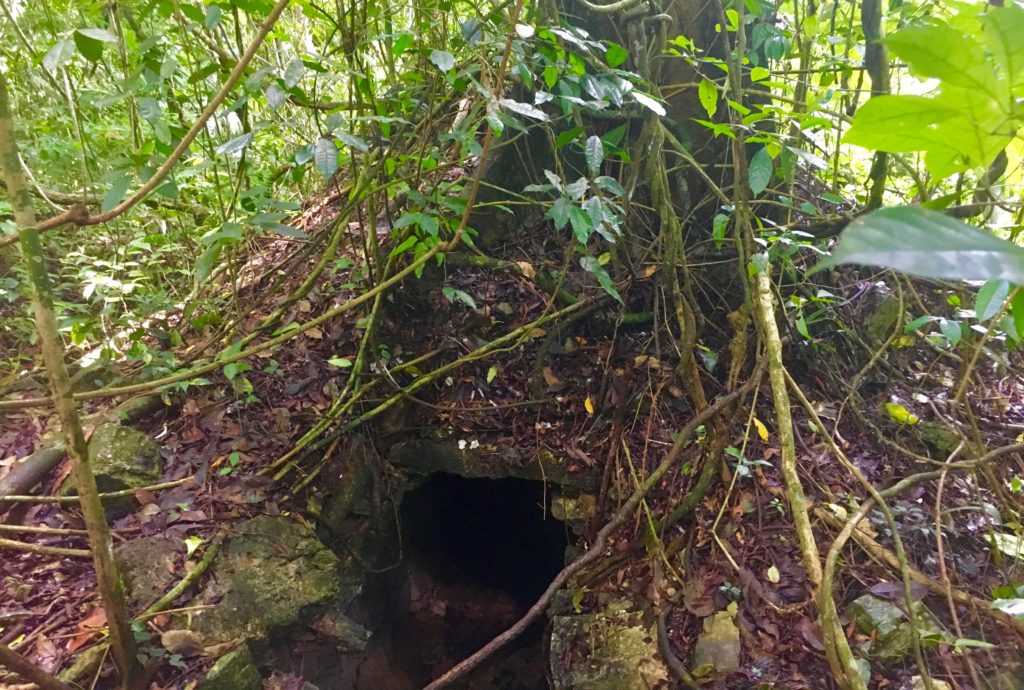 Mayan ruins buried in the jungle in Mexico.

Once we were able to climb down into the structure we examined the interior. This was built out of stone and had originally been covered in plaster. We took these photos to show you this area. It really was like being in Egypt and being able to explore ancient ruins that only archeologist get to see. 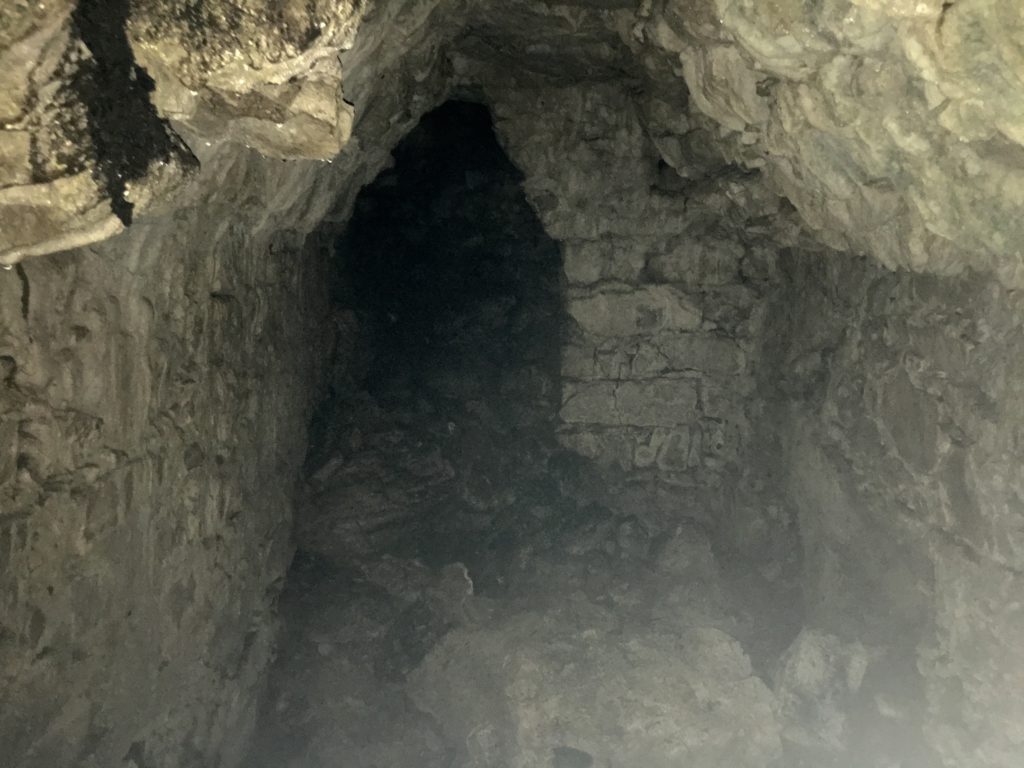 A Mayan structure that has been abandoned for over 1,100 years!

In this area there are also many examples of pottery. When there are rainstorms and trees falling over, the soil gets disturbed and exposes pottery. Here were some examples we saw, and then we left them in their place. 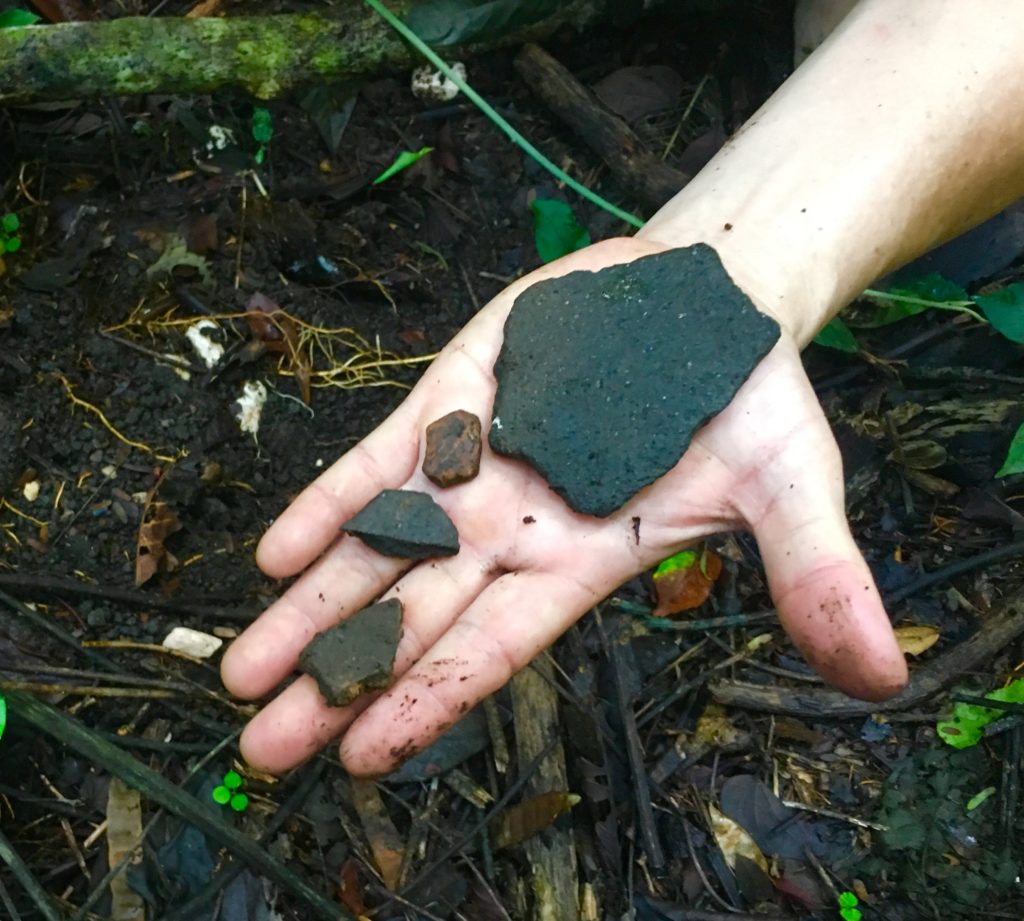 As we mentioned in the video, we all can support the preservation of history by voting with our tourism dollars. The more people that visit these ancient sites give money for further exploration and restoration of  buried history. There is a wealth of knowledge and history that is still to be rediscovered in Mexico. We look forward to brining you more about the deep history and culture of the area.

For more on visiting Mayan ruins in the Mexico and when you come to the Riviera Maya, we have a guide to available Mayan ruins to visit. We hope you get to see some of these Mayan ruins while here on vacation. You can make it as much of an adventure as you want!

Would you like to go on an adventure like this? What is your most adventurous thing you have done in Mexico? Let us know in comments below.

3 Comments on Our journey deep into the Mayan Jungle in Mexico!